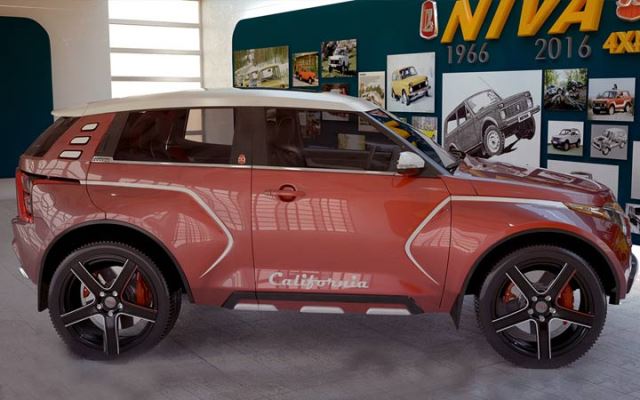 Niva (Lada 4 × 4) - the first domestic SUV, which received incredible popularity not only in his homeland, and far beyond. For more than 40 years, this reliable car has remained unchanged by sales leader and in the vehicle community the question is brewing: "What will the next generation of the model?"

Perhaps it will be a completely new car that does not have anything in common with a well-known model, and a stylish Niva California and the project of which is increasingly remembered in 2021.

The history of the NIVA model began back in the distance 1969, when Solovyov announced his concept of a reliable domestic car of increased passability, and the first VAZ-2121 car came down from the conveyor already in 1977.

The exterior of the Niva car is recognizable in more than 100 countries around the world, because the car has become not only the exported model, but also the only representative of the domestic auto industry, who received recognition in Japan.

The main advantages of the domestic compact SUV are:

For 40 years of history, designers managed to develop a wide variety of modifications of the model, many of which did not go into the series.

Planning a large-scale modernization of the popular model AvtoVAZ announced a tender for the best design project of a new generation of compact SUVs. One of the most interesting options was the project of Niva California 2021, submitted by a young designer from Tolyatti. Denis understood believes that the next generation model should receive:

The project was presented at the exhibition of transport design, which took place at the end of 2016 in Ekateringburg (Russia).

Features of the model

As a basis for its prototype, the designer took a platform with a wheel base of 2500 mm, which on the one hand retained the compactness of the car, and on the other hand provided a sufficient amount of free space in the cabin and the spaciousness of the trunk.

The exterior of the car turned out to be bright, aggressive and futuristic. The appearance of the new Niva California form designer solutions such as:

It is reliably known that the management of AvtoVAZ bought this version of the design, but the official confirmation of the fact that California Niva will be released in 2021 or 2022 never followed, as well as any details about how the interior may be, specifications, price and configuration of the model.

The AvtoVAZ leadership thinks whether the launch of such a large-scale project will be promising and economically appropriate, as a new Niva California, which will be a competitor to the Lada Xray model, which predicts excellent sales in 2021-2022.

But, there are alternative options to continue the history of the legendary NIVA car. So, on the development of a new Russian SUV, seriously conceived in the Renault-Nissan concern. The implementation by 2021 of their project Chevrolet NIVA 2 today looks more realistic than the prospect of the release of the serial version of California Niva.

Make clarity in the topic of the new generation of the NIVA model will be able only to time. I would like to believe that the 2018 Moscow Motor Show will please the opportunity to contemplate the real future of this model, and not just another designer project with impressive prospects, but the minimum chances for the implementation.

We also offer to watch a video, which discusses different existing models for today: