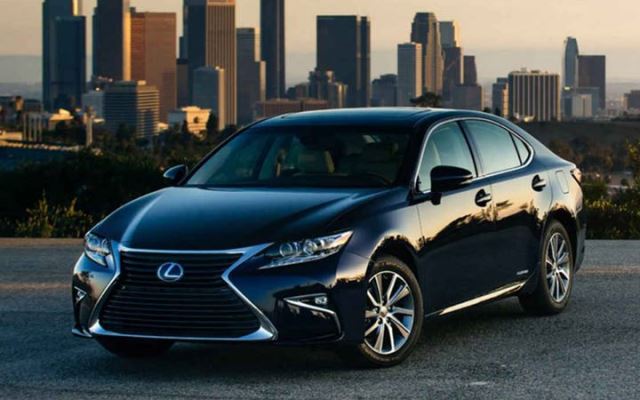 The LEXUS Japanese automaker was created by Toyota specifically for the release of premium cars in 1983. For all LEXUS cars, the following key advantages are characterized by:

All listed properties have both a passenger car Lexus under the designation ES (Executive Sedan), which is decoded as an executive sedan.

The first cars of this class were released in 1989 and were intended specifically only for the US market. The new model immediately earned a large commercial success, which in the future the company continued to increase. This confirms the fact that the sixth generation of ES sedan has been produced currently developed in 2012.

Despite the stable interest in the car by buyers, Lexus decided to prepare and in 2018 to offer a new generation of ES model. This decision is associated with the emergence of new modifications of representation cars from competitors companies (Audi A8, Infiniti Q50, Mercedes W222, Jaguar XJ), a rather long period of release of the previous sixth modification, as well as the rapid development of new automotive technologies.

The official presentation of the new model company has scheduled for the New York auto show of next year. Currently, road tests of the new Lexus ES 2018 are completed, which allowed a number of leading car publications to present photos and other information materials about the car. Even a quick familiarization with photographs of the new sedan makes it safe to say that Lexus managed to create a unique external image of their car. Such elegant design is formed using the following solutions:

All indicated solutions form an image of a new chic sedan.

The presented photos and descriptions of the interior of the new Lexus ES 250 2018 indicate its luxurious finish and excellent ergonomics.

The model attracts attention to such innovations as:

Also, the new Lexus is characterized by a three-row construction of the central console, on which:

In the finishing of the model, only premium-class premium applied to which high-quality embossed skin, polished inserts from noble tree species and carbon, improved plastic. To reduce noise, highly efficient protective components are used, as well as noise absorbing glasses.

In addition, comfortable conditions inside the new sedan allow you to form the following overall dimensions:

For the recruitment of the EU Lexus of 2018 in the new body, the manufacturer has provided power gasoline engines with the following technical characteristics:

With both units, only a 6-speed front-wheel drive automatic transmission will be applied.

The status of a representative sedan indicates the highest equipment equipment. Among systems and equipment, which are planned to equip a new Lexus ES should be especially noted:

Full information on available equipment for equipping a new ES generation will be represented by the manufacturer before starting acceptance of applications for the car.

The beginning of the production of a representative car LEXUS has planned for the summer of next year. Traditionally, the first cars will go for sale to the North American dealers.

In Russia, the start of sales of the new Lexus 2018 is scheduled for the next autumn, while the price of the model in the domestic market will be announced only a few months before accepting applications.

The ES car is a business class sedan who has been manufactured by Lexus since 1989. The ES designation comes from the "Executive Sedan" formulation, which is translated into Russian as a representative sedan. This sixth generation of cars is produced since 2012 and therefore the appearance of modification of the ES 2018-2019 model planned by Lexus, which is a premium division of the Toyota concern. Given this fact, the business sedan is based on a single platform with the Toyota Avalon model.

Like all representative automobiles Lexus ES are characterized by the following properties:

At the very beginning of its production, Lexus ES was intended only for the American market, but a great interest in the car allowed him to be successfully sold in other markets. In Russia, the representative sedan appeared at the end of 2010.

The changes presented in the photo of a number of publications that Lexus performed in the appearance of the EU in the new body of the Sample 2019, primarily aimed at creating an updated branded design for all its cars. Therefore, the greatest changes were carried out in front of the business sedan. As a result of the overgrown, the following significant differences between the updated version of ES from the previous modification can be noted:

Changes were added to the traditional solid and stylish image of a representative car of the dynamics and if so many aggressiveness can be expressed.

Improvements performed in the interior of Lexus ES 2019 in the new body are not global.

The interior of the car has a luxury, magnificent ergonomics and among its main advantages, it is necessary to allocate:

To form additional comfortable conditions in the cabin, the following equipment and functions are intended:

The car is equipped with a number of decisions to reduce noise, including special glasses.

Transmission with front-wheel drive with all variants of motors is equipped with an eight-dipbandon automatic transmission.

Like all representative cars, the updated Lexus will have a very rich equipment, the full catalog of which the company will report before the start of production, and at the moment it is known about the following basic equipment:

The official presentation of the new model is scheduled for autumn 2018. The planned production start - the first half of 2019. The initial Lexus ES of the Sample 2019 is traditionally for sale in the North American market, and in the opinion of specialists, the price will approximately begin from $ 39,500.

The appearance of a modified version of the business sedan in Russia should be expected at the end of 2019.