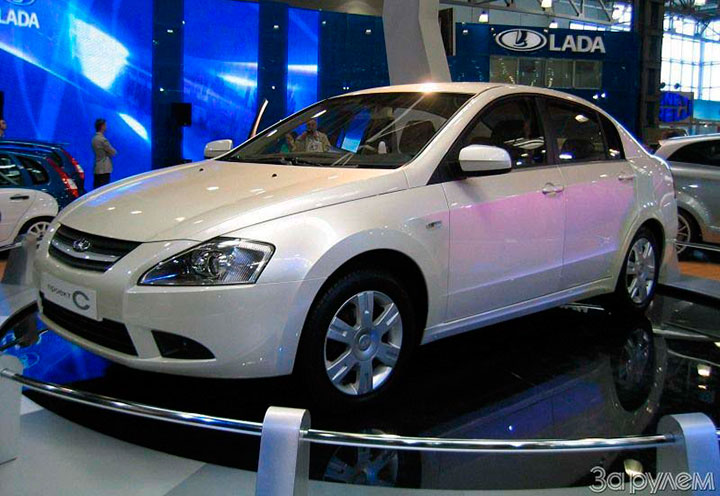 Euphoria has already passed from anticipation, expectations and hopes that the new models of 2019, finally, will be offered to domestic motorists for a long time expected - modern, reliable, functional and inexpensive cars. The AvtoVAZ leadership, announcing the next development, says what consumers want to hear, but the conveyor comes with qualitatively other products.

To the innovations of 2019, it is possible to take a slightly updated Lada Priora with a large stretch. The 2019 will be the last year of the release of this model, so bypassing in this review the PRIORA will be wrong.

The model honestly served us for a long period of time and let it be far from perfection, she contributed to the development of a domestic car industry. PRIORA update in 2019 is a swan song model and developers will try to use the entire potential of the car.

Designers did not leave everything as well as honestly, to the end work out their fee. The updated Lada Priora will receive a new radiator grille, a few new posts will appear, the shape of the hood will be corrected. It will not change the look of the model dramatically, but gives it a more modern and attractive look.

Noticeably worked the designers over the form of the front bumper. He looks completely different, has become more interesting and difficult, got rid of primitive forms. The new bumper escaped the appearance of the car as a whole. Fog lights also received another design and purchased chrome edging.

Designers not ascended to apply deep emptying, similar to those used on new models. Such elements we will see on the doors and wings of the updated Lada Priora.

The creators of the LED elements will be cleaned, which will take place in the rear lights. Change the appearance, of course, local, but pleasant and desired.

Interior of the new Lada Priora

Having worked on the appearance of Lada Priora 2019 designers, apparently, exhaled, because in the cabin we practically do not see changes. If we speak frankly, then we did not expect changes inside. Obviously, changing the layout of the controls and design of the details of the model of the model, which is about to remove from production, it does not make sense.

In the maximum configuration, the salon and the front panel of Priora looks quite well.

No matter how much the developers make some changes, the framework of the feasibility of this did not make it. We will remember Lada Priora with hard plastic, which does not indulge their passengers with an excess space, with not very good quality assembly and numerous "crickets", uncomfortable seats of the rear row with a practically vertical back.

Technical characteristics of the model

Under the hood, Lada Priora 2019 is not planned. We will see the same power units with a volume of 1.6 and 1.8 liters. No manipulations of motorboys did not perform with them. We still will be available only 106 and 123 liters. from. Power. Do not try to reanimate and robotic gearbox again.

It was an interesting experiment, which provided engineers a sufficient amount of food for the mind. Exquisition continues in the optimal configuration and suspension settings. With the quality of our roads, this is an extremely relevant problem, which is still to be solved once and for all, if it is generally possible.

So, the first thing in 2019 the new AvtoVAZ leadership intends to update its budget car Lada Grant. Once it was Granta that became a full-fledged replacement of the Samara model. It is planned only to release a restyled version, and engineers, engaged in their direct responsibilities, will have to improve the technical characteristics, leaving the previous exterior and interior, transforming their recognizable appearance only in part.

The cost of the car will remain the same as it was before.

Not very confidently starting in 2016 sales of Lada Xray, it seems, gain momentum. In early 2017, the implementation of this model increased by 126% (in February). This is a huge increase, in comparison with the successes of other manufacturers whose indicators demonstrate in the overwhelming majority of negative dynamics.

In addition to Xray, only one model also added significantly in sales - this is a VW Tiguan with an increase of 119.8%.

The AvtoVAZ management makes a big bet on Lada Xray, as the only modern crossover of domestic production (not counting Lada Kalina Cross).

The competitiveness of the car depends on the set of factors, including from the period of its update. Therefore, it is not surprising that already in 2019 is preparing to the output modification LADA Xray with the CROSS console.

Modification involves mostly high-quality changes, so externally Lada Xray Cross will not differ radically from the base model. The only separation difference will be size. The basic model is built on the Renault Sandero platform, while Cross will be on the Renault Duster base.

In addition to increasing the dimensions, we will be able to see only local external changes. To emphasize the more pronounced ossellite properties of Lada Xray Cross, equip the massive bumper and protective plastic overlays throughout the perimeter, including doors and wings.

Rear lights are slightly modified. They will become more complex in shape with an interesting architecture. Head lighting will be complemented by running lights based on LED elements.

The new base will naturally affect the increase in space inside Lada Xray Cross. The layout of the devices and the design of the decoration devices will remain the same.

As usual, AvtoVAZ leadership promises quality finish materials, but we will understand that everything will end up in the price tag. In the cabin we will see other chairs and decorative elements in the body color.

Promise a full-fledged information and entertainment system with a convenient and functional interface. Managing a wide range of functions will be put on the steering wheel, which promise to seize the skin. An important point is to increase the luggage compartment, we expect no less volume than in Renault Duster.

Technical characteristics of the model

Very sad news is the refusal of the AvtoVAZ leadership from the production of all-wheel drive Lada Xray Cross, in any case, in the near future. That is what we meant when they said that one thing was promised, but another thing is made.

In principle, the domestic car is a similar Renault Duster - this is already not bad if he will cost as a domestic car.

It is still a shame that instead of a full SUV will be offered a semi-finished product. As the power units on Lada Xray Cross, the engine volume of 1.6 liters and 114 liters will be installed. from. and 1.8 l from 123 liters. from.

With a new way, Kalina is in a similar way, as with a new grant. By improving this model of a car under the leadership of Nicolas Mora, engineers intend to make it a little more powerful. Also, they can also increase the vehicle in size, but non-imminent. All this is done to improve operational performance. The appearance of the car due to this will be slightly more aggressive, which is also important.

Restyling version of Lada Kalina is scheduled for mid-2017. Like the updated Granta, the new Kalina will be sold at the same price.

Another "stateput" AvtoVAZ, who fits in the novelties 2018-2019, - Lada Largus - will survive restyling. Working on the new version of the car, the engineers learned the wishes of the higher leadership regarding the change in its appearance, which they will now have sports. At the same time, the vehicle will remain as intended for the whole family. One of the innovations is a recycled wheelbase.

The emergence of the updated model Largus is scheduled for the period 2018-2019. As for the price, it is likely that it will not change.

New AvtoVAZ models in the period 2018-2019 also implies the release of the finalized West line. It is no secret that in the near future it is this model will be a full-fledged replacement in the PRIORA market. It is planned to be a full change of the Vesta development course towards the extended functionality and increased power.

There is information that part of the update plan specifically this model will be performed in the first half of 2018, while everything else is in the second half of the same year and throughout 2019. The final product price should remain the same.

AvtoVAZ does not cease to amaze. Another staggering news - in 2019 is preparing for the output of a completely new LADA 4x4. The world's first SUV with a bearing body of domestic development of 1977 will be fully updated after 41 years. That's not all. The new "Niva" will also be put on the Renault Duster base.

You have long been to see the renders of the alleged appearance of the new LADA 4x4. The car really was to change dramatically, but at the same time in the new body design, it was still guessed to pain to the familiar "Niva".

Lightly rustic, it may be too concise design of the new version of the model looked, however, quite attractive, especially with the talent of the domestic automotive designers.

The news that Lada 4x4 will be built on the duster database, put a fat cross on all the work done on creating a new look of the model. The Renault Duster base suggests that the car will be a 5-door. This is not our "Niva".

Despite the fact that 5-door LADA 4x4 is already produced quite a long time period, it is perceived hard.

What will look like LADA 4x4 on the DUSTER database is completely incomprehensible. There will be developers to try to "pull" the ready image to a new platform or offer a new design concept is still unclear.

Given that the new Lada Xray Cross will also be built on the basis of Renault Duster, the task of designers is significantly complicated - you need to create something completely new, unlike any duster, nor on Xray Cross.

The interior of the new Lada 4x4

All of the above can be fully applied to the interior of the new LADA 4x4. About him and until this point was not known to be known, but taking into account new circumstances and the designers themselves are not yet ready to say something defined. Salon of the new generation LADA 4x4 is a big intrigue.

Unambiguously, we can say that no matter how much the new model from the inside looks, it will be functionally on the head above the predecessor. AvtoVAZ developers are gaining experience. Everything, the developments that appeared during the design of the XRAY and VESTA salon should be implemented to one degree or another in the new LADA 4x4 2019.

As force aggregates for LADA 4x4 2019, several options are considered. First, the engine volume is 1.7 liters with an increased power up to 103 liters. from. (increase in 20 l. p.). Secondly, also a revised version of the motor, which is currently completing Xray and Vesta, the volume of 1.8 liters.

Sales of traditional for LADA 4x4 full drive in question. What is this 4x4 of this and what in this case will the car differ from Lada Xray Cross? Unfortunately, at the moment there are much more questions than answers. We will wait for information from official sources as the model is developed.

In principle, if you believe rumors, this is a C-class car decorated in the bodie of the sedan. In principle, he will have many advantages over competitors. In principle, advanced technologies will be installed in it. It is said that the appearance of the car will not be deprived.

Presumably, the yield of the C-class sedan from AvtoVAZ will take place in the second half of 2019. Its cost will be around 500 thousand to 1 million rubles.