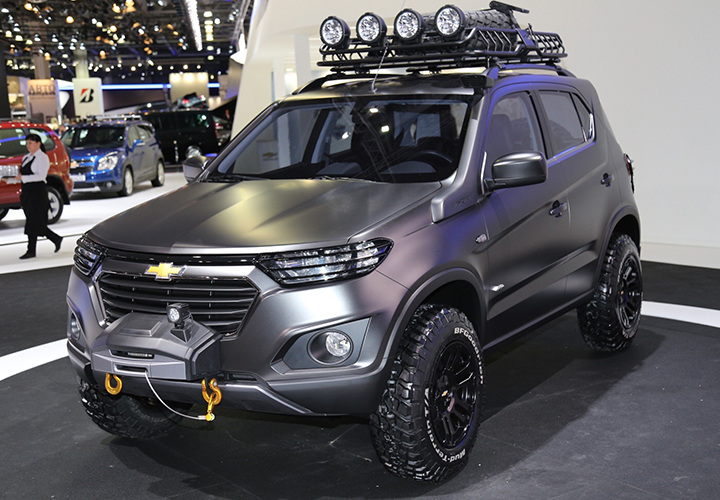 The new Chevrolet Niva, the release of which is scheduled for the period 2017-2018, already promises his old adherents in advance and new fans that it will work out much more beautiful than the predecessor. Yes, and endurance will rise it. And yes, we are talking about the car, do not think anything superfluous.

Manufacturers have tried and made many changes and improvements, among which are the most significant:

So, the original was born in 2002. After that, the GM-AvtoVAZ company produced a restyling version and special sector. Then the project, according to which engineers were supposed to be engaged in the production of second generation of Niva, was postponed. According to the latest data, it was resumed.

Insiders say that now the joint venture "GM-AvtoVAZ" is working over the new version of Niva. They found out that the main features of the novelties will definitely come up with the fans. It is also important that they will be similar to those that could be noted, examining the concept car of the SUV NIVA II, presented in 2014 within the framework of the MMAS.

What is enough lyrics. A little retreated for the benefit of the case, and now we are coming again. You require details, and we are divided with them. The new Niva Chevrolet 2018 years of exit to sell, if you believe rumors, will change in terms of your appearance. Engineers adequately worked the moment of the transformation of the body at the expense of the form. And so as if they worked for a long time.

One of the team members to develop the concept of the car was the Ontrey Koromaz, an ex-employee General Motors. Thanks to him, the SUV acquired overwhelms for greater geometric patency.

Chevrolet acquired a more aggressive, heavy and courageous appearance, outwardly departing from the image of the standard city parquet: a massive trunk with a spare wheel on the roof, a row of four spotlights, winch on the front bumper, Schnorkel.

At the same time, the previous body dimensions are preserved, but due to plastic linings, the length of the Niva rose to 431.6 cm. The spare wheel is shifted to the center of the fifth door, there is a spoiler-threshold in the luggage compartment.

Each component of the lighting system is also subject to change. Both the headlights and fog, and various kinds of "lighting devices" were tinted for verification. To increase protection on the headlights there are steel overlays, on the radiator - a powerful grille with a metal lining, a metal sheet on the bottom.

Of the minuses, it is possible to note the decrease in the volume of the trunk on the roof due to the spare wheel, as well as the presence of wide stands of the rear door and narrow rear windows, which respectively reduces the visibility.

The internal layout of the 2018 models of the year is supplemented by a number of important elements requiring more detailed study.

2. A larger number of opportunities for the driver, because of which his attitude to the process of the trip can change to change. With long journeys, all passengers will be able to feel as comfortable as possible, due to the endurance of the model.

It turns out that there will be no only driver, but all passengers will be comfortable during the trip. Violating Idyllo will not be able to virtually nothing, for which you should thank the excellent insulation. By the way, high-quality materials were used to create it.

Increases the repulsion of a variety of noise and installing new glazing, but this opportunity is not yet confirmed officially. Constructive elements of the cabin are made of expensive materials: wood, fabrics and places even skin. Top vehicle versions will acquire a navigation system and air conditioning.

The manufacturer decided to provide a novelty with a three-wing steering wheel, which contains a lot of function keys, to manage important vehicle features. For example, quickly set the desired movement course.

Since the car now has a considerable list of potential competitors, the AvtoVAZ government decided to at least interest possible buyers. To speak more precisely, to disclose information about the technical side of the Chevrolet Niva.

So, under the hood of the updated car uses a gasoline engine, the level of productivity of which reaches 150 horsepower. Agree - a good parameter, as for the domestic vehicle. A mechanical gearbox with 5 steps, characterized by its endurance and durability, is aggregated. With such parameters, the overclocking time before the first 100 km / h reaches 14 seconds, while the maximum speed of movement of the SUV is not more than 170 km / h.

The fuel consumption indicators are considered not too rainbly: the city of auto consumes 11 liters per 100 km, in a mixed cycle of driving - 13.5 liters, whereas the motor requests subsidize - no more than 9 liters.

Before reading the cost of the vehicle in Russia, it should be mentioned that Niva Chevrolet will be sold in 5 different equipment. The initial version will cost a potential buyer at 460 thousand rubles, while a more equipped model costs all 600 thousand. For this money, you can already count on the installation of electrically regulating side mirrors, heating and ventilation of the front armchairs, rear parking sensors and adjustment of the steering column.

The latest news that we managed to find at this point are forced us to inform you that the Niva Chevrolet 2018 will cost ... not higher than 1 million rubles. That is, the price will remain the same. In general, depending on the configuration, it will be possible to become the owner of the car by paying at the Auto Show from 600 and more than thousand rubles. However, rumors about growing prices for this model up to 15 percent. Start of sales - approximately the end of 2017 or the beginning or middle of 2018.

Watch a video with a new car: