The emergence of a new model in the company is associated with two main factors:

Increase the release and demand of cars on ecological fuel. A significant increase in demand for Class SUV cars (subcompact crossover).

The development and production of this model is an important project of KIA in the development of production of its cars in the segment of environmental vehicles. Therefore, the NIRO crossover is based on a platform that will become the basic for a number of eco-car company. 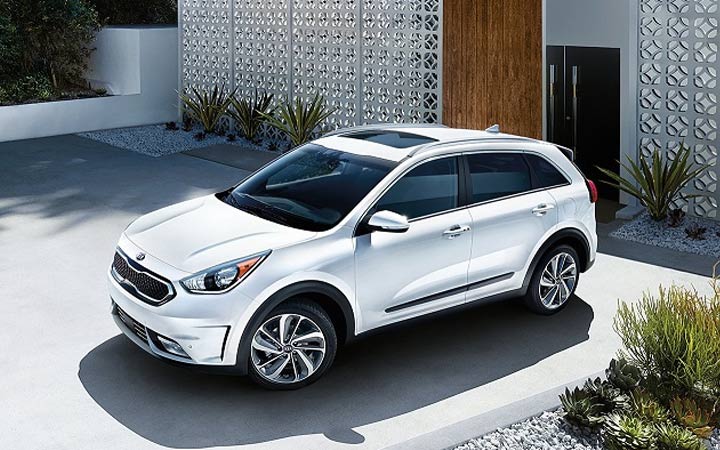 The choice of KIA for the first fully electric car of the subcompact crossover variant is associated with the fact that the vehicles of this class have the following very important advantages:

KIA has introduced a new electric NIRO release, which is scheduled for 2018 at the Geneva Motor Show this year.

Nuances of the market of rechargeable hybrids

No matter how much the old light sighs with its traditions and exquisite flavors, the ball on the automotive planet market rules two regional markets - China and the United States. In 2016, 24.38 million cars were implemented in China, 17.54 million was sold in the United States for the same period.

For comparison in Japan, which occupies the 3rd line in the ranking, 4.15 million cars are sold. The brand that will ensure success in China and the United States, will earn a lot of money. The task is a hard one, but the size of the expected profit costs any effort.

At the Geneva Motor Show, where the phev kia niro debuted was also presented a hybrid rechargeable version of the Kia Optima wagon and none of these models went to be sold in the United States.

Koreans intentionally do not bring their rechargeable hybrid Kia models to the North America market. Why? Because they are not ready, and do not want to spoil their reputation only by starting working in this segment.

The American market is oversaturated with suggestions, and the Americans themselves in the automotive plan are spoiled and picky. They will not buy a raw model, especially Korean. To succeed in the United States Kia Niro should increase the maximum distance distance for its rechargeable hybrid crossover.

By the way, who is not aware of the PHEV abbreviation decrypts as Plug-in Hybrid Electric Vehicle (rechargeable hybrid electric car) and are distinguished by these cars from hybrids (HEV) precisely the fact that they provide for the possibility of recharging batteries from an external power source.

In addition to PHEV and HEV, there is a completely electric (EV) version of Kia Niro, which is also not represented in the US market.

HEV and PHEV KIA NIRO 2018: What is the difference?

Let's see how the basic Hev Niro 2017 is different from the new rechargeable KIA NIRO 2018. The base model uses a 4-cylinder engine, the volume of 1.6 l connected with a synchronous AC motor with a permanent magnet operating from a lithium-ion battery with a capacity of 1.6 kW.

The rechargeable version uses the same configuration, but increasing power consumption with a battery capacity of 8.9 kW / h, which are installed under the rear seats and under the hollow of the luggage compartment.

At the moment, information is not available regarding the total power, affordable torque and fuel economy indicators. The manufacturer only stated that the rechargeable version of Kia Niro can overcome on a fully charged battery about 54 kilometers only by electrical energy.

For those who "persistent" in the mileage indicators of their hybrid car Kia Niro offers the ECO Driving Assistant brand system with the function of controlling and forecasting the energy resource consumption.

This system is closely related to GPS and helps the driver, suggesting when you need to slow down, you can accelerate, it is best to waste and save the energy resource. Eco Driving Assistant gives its recommendations based on the topology of the area and the specific road, which moves the car.

Regenerative braking is actively used in PHEV KIA NIRO, due to which the replenishment of energy reserves of batteries is replenished. The information and entertainment system provides for the function of displaying the nearest charge stations, which does not interfere in the long road.

For those owners who are not against sometimes to forget about saving fuel for solving household problems, developers offer a special towing package of options that allows KIA niro towing a trailer with a mass of 1.3 tons.

Visually neither inside, nor outside PHEV KIA NIRO 2018 will not differ from the hybrid model of 2017. Some nuances are present, but only experts will notice them.

KIA continues to apply the concept according to which its hybrids and electric vehicles do not differ in special design. If you do not know, then you never guess that you are a car with elements of "green" technologies.

The appearance of the crossover is in line with the current KIA brand style. The front of the new NIRO is characterized by: 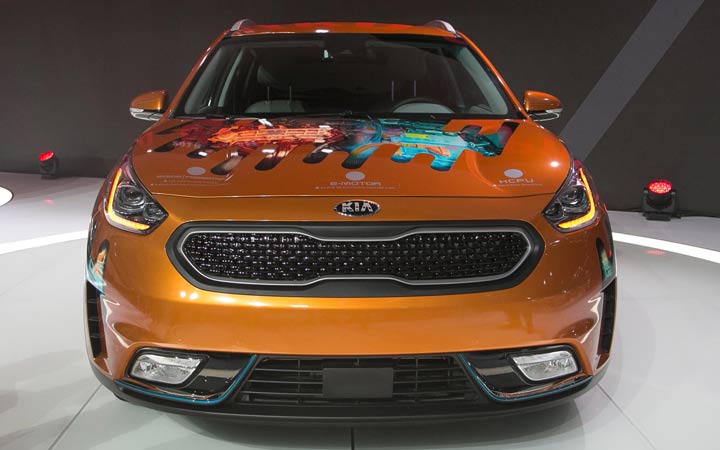 The use of such a large angle of inclination together with a smooth and rapid transition of the roof line of the crossover roof from the front to the rear, as well as the use of a special shape of the side mirrors is aimed at improving the aerodynamic characteristics of the car, which made it possible to obtain an aerodynamic ratio of only 0.29 CX. 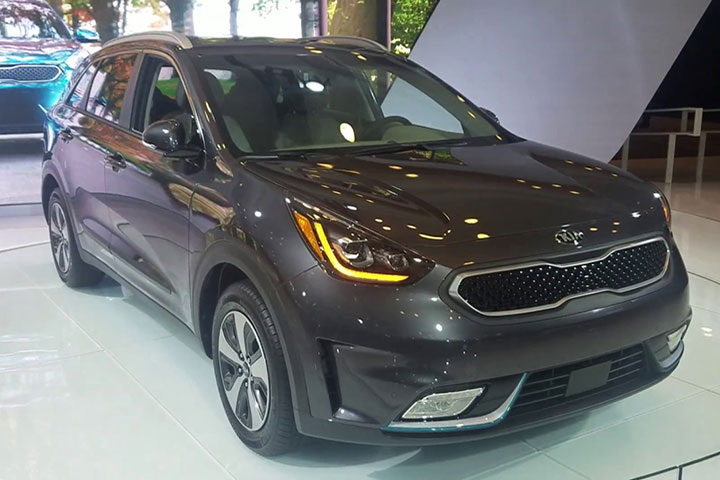 The dark plastic body kit mounted throughout the perimeter of the car is emphasized by Niro's belonging to the class of crossovers. 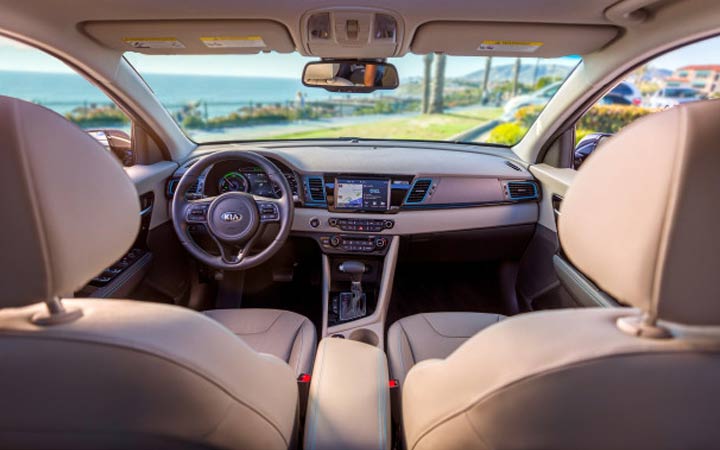 An example of such solutions serve:

The center console is located a display of a multifunctional complex, on the sides of which there are inclined climatic system deflectors, and at the bottom of the control key of various cross-drive systems. It is also seen that in the cabin itself there is a large number of shelves, departments and niches for various things. 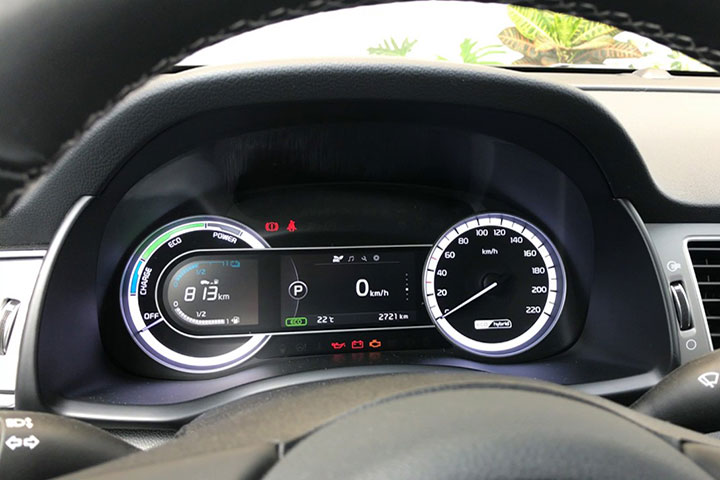 The new Niro has the following dimensions: 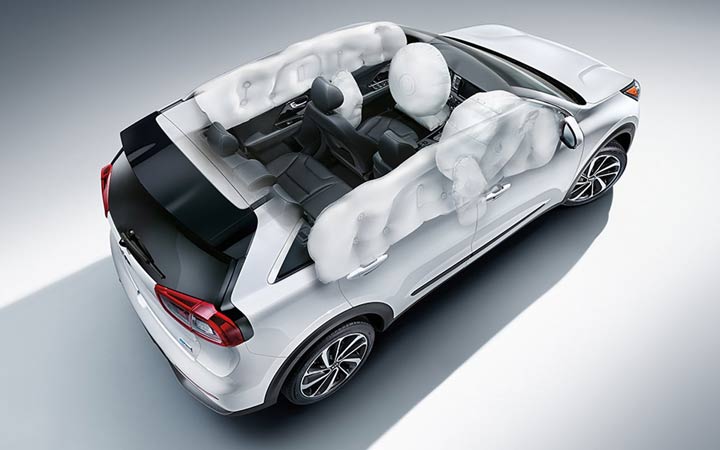 With the goal of reducing electricity consumption, designers not only sought to create a maximum aerodynamic form for a crossover, but also reduce its weight. To this end, the car applies: 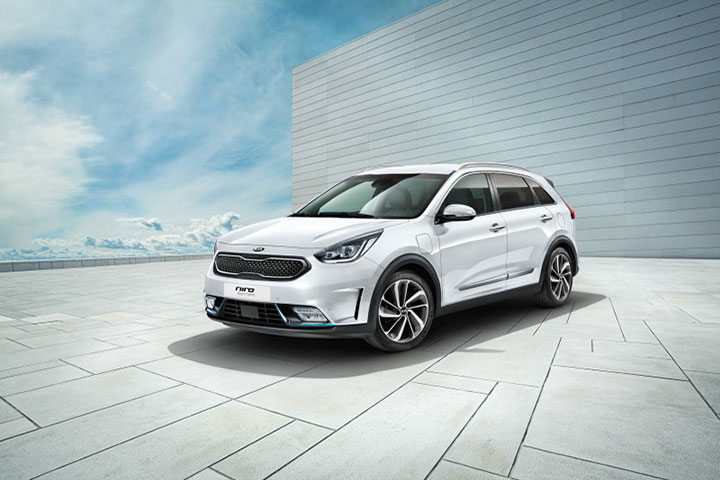 The power electrical installation of the crossover consists of the following items:

With these technical characteristics, the battery and the motor will be able to provide a crossover 280 km on one charging of the battery.

The equipment includes special functions that are intended only for electrical vehicle options, namely:

Crossover, as well as standard cars will be equipped with the following equipment: 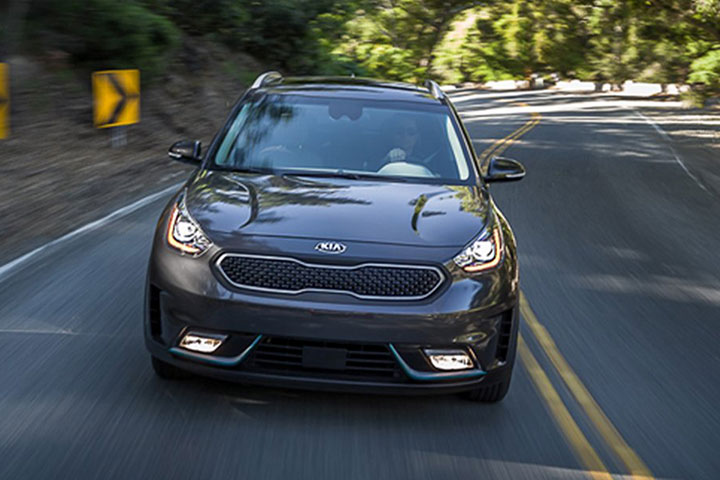 Start of production and price

KIA plans to begin production of Niro Electrocrig Councils in the second quarter of 2018. Accordingly, the emergence of a car in the salons of official dealers should be expected no earlier than the summer of next year. At the same time, the initial sales will begin in South Korea. The estimated price of electric KIA 2018 will be 45 thousand dollars. After that, it is planned to start sales in Europe and America. The electrocrustovover is not planned to supply to Russia.

The official presentation of the Futuristic crossover KIA NIRO EV took place in January 2018 within the framework of Consumer Electronics Show in Las Vegas. 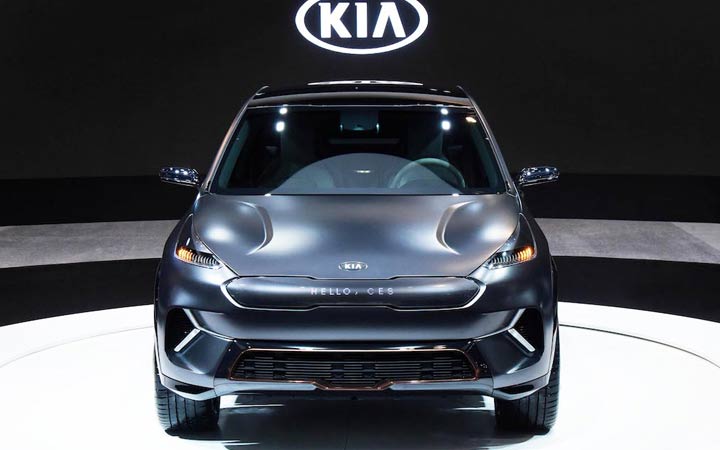 The new version of Niro hybrid cars familiar to the connoisseurs of hybrid cars received a fully 203-strong electrical power plant, the performance of which provides a powerful rechargeable battery.

The car received a spectacular futuristic design, as well as an exclusive interior with two displays, a sports steering wheel and an originally designed multimedia control unit. 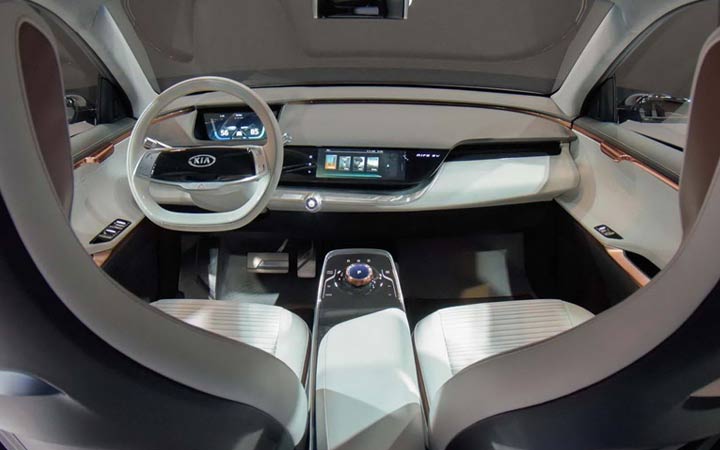 The manufacturer promises that one charge with a new NIRO should be enough for 380 or 500 km, and thanks to the quick charging system, the battery will be charged to 80% in just 30 minutes.