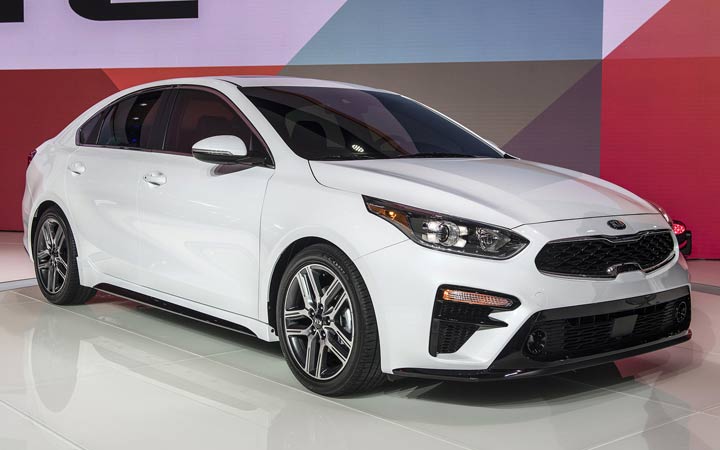 The first auto show of 2018, held in Detroit, presented to motorists such a novelty as a stylish sedan Kia Cerato. The car received a completely new, stressed sports design and a number of important technical improvements.

The immediate appearance of a new generation of the popular Cerato line said for a long time. But the manufacturer kept silence, heated by intrigue and forcing everyone to be lost in guesses, which will be new auto models, known and the United States as Forte, and at home in South Korea under a brief name K3. Kia Motors Corporation Guide is a novelty as a car with a sports heart and chamimatic appearance, which must like young and active people.

Presented in January 2018 Kia Cerato - a five-seater sedan, in the exterior of which is read similar to Kia Stinger. But nevertheless, a novelty has the person with individuality and attracts attention to a harmonious combination in the design of classics and modern trends. 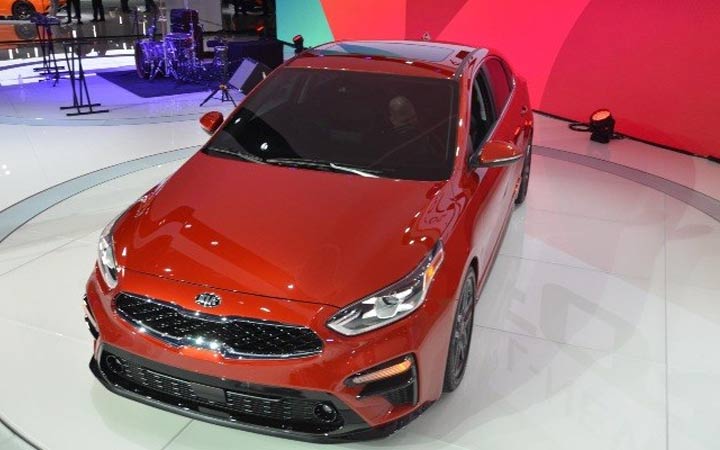 From the preceding model, the new sedan is distinguished:

From the side of the trunk, the car looks no less effectively. LED optics consists of two blocks, which creates the effect of flowing pattern on the trunk cover. A LED strip, uniting lights in a single module, looks very stylish.

Massive rear bumper, which integrated back lights, gives the car even more solidity. 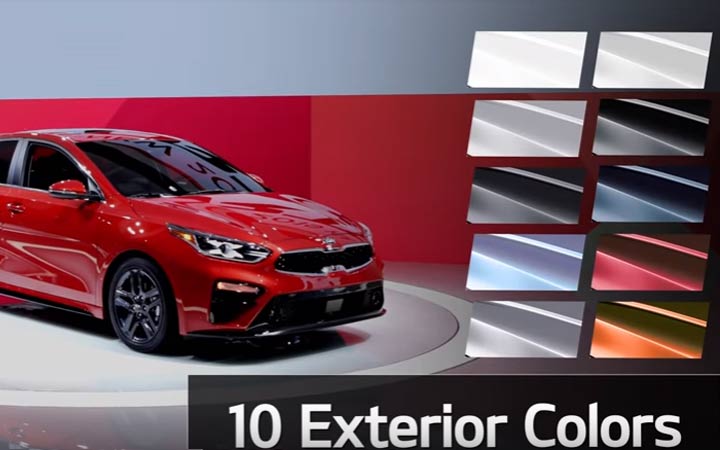 Thinking the advertising campaign, the corporation management has focused on the sports characteristics of the model. In the presentation video, Cerato compared with the cult Lamborghini showing how much more practical is the fast, stylish and having the most enviable functionality of a new generation sedan.

Inside the car does not look modestly, but also not catchy. There will be nothing superfluous here. Restyling brought into the car and new materials in the finish - now it is used and genuine leather, and even in the database it can be found. Everything else is performed by cloth, good plastic and aluminum.

Kia Serato 2018 dashboard is small. In the center of it - a seventhimemic multimedia screen, in which the entire main functionality of the model is located. Just below, there are several rows of buttons, but they can only control the climate installation, as well as the simplest functions. On the sides of all this there are deflectors that occupy approximately half the length of the entire tidy. The same are also at the ends of the Torpeda.

The central tunnel is wide, but not long. Pretty close to the driver is now placed handle gearbox and two more rows of buttons changing ride modes. In addition, here you can find small holes for various trifles and modest, but convenient armrest.

But the steering wheel applies another, not as on other new products KIA. He got another form and functionality. You can customize the audio system from it, respond and finish calls from the phone and activate cruise control. The instrument panel is original - completely electronic and appears only when the motor is head. There you can see the current speed, turnover, the amount of fuel, the temperature of the oil and other information that the on-board computer displays. 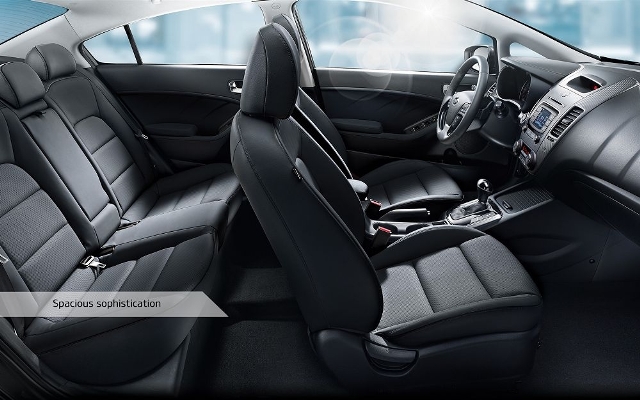 Quite high-quality materials are used to finish the seats. Outside it is fabric and skin, and inside the original material, which is not hard, and not soft, thanks to which even in distant and sophisticated trips about discomfort you can safely forget. There are several options for adjusting the position, heating and side support. Behind the place is not that much, but enough for sure to two people. The third problems may already arise, but if it is not very overall, they will be quite avoided. There are also some adjustments and side support.

There is no information on the luggage branch of the machine. But, if we consider that the dimensions did not change, then, most likely, the volume of the trunk also remained the same. In normal mode, this indicator is 480 liters, and with a folded rear row - under 1400 liters. 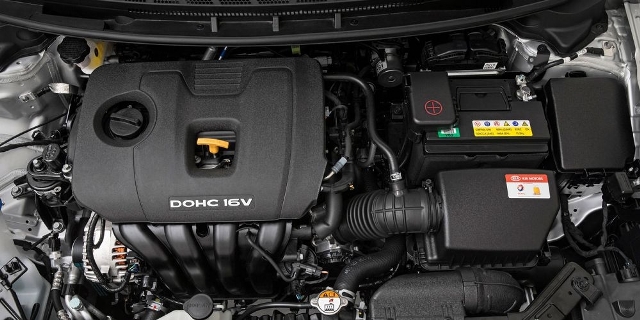 And here Kia Cerato 2018 will not differ much from its predecessor. Characteristics of the proposed motors will remain the same. These will be gasoline installations whose volumes are 1.6 and 2 liters. They will be able to up to 131 and 152 horsepower power, respectively. The model did not become faster, but the test drive showed that the fuel consumption was significantly reduced. Now only 6.5 and 7 liters of gasoline are spent.

For the first unit, a six-speed transmission may be made, which can be both manual and automatic, but the second will be able to boast only robotic.

Significant changes occurred in the suspension so that the car would better feel on our roads, because the Russian market is one of the priorities. There are also several modes of engine settings, transmissions and suspension, which are controlled from the cabin. 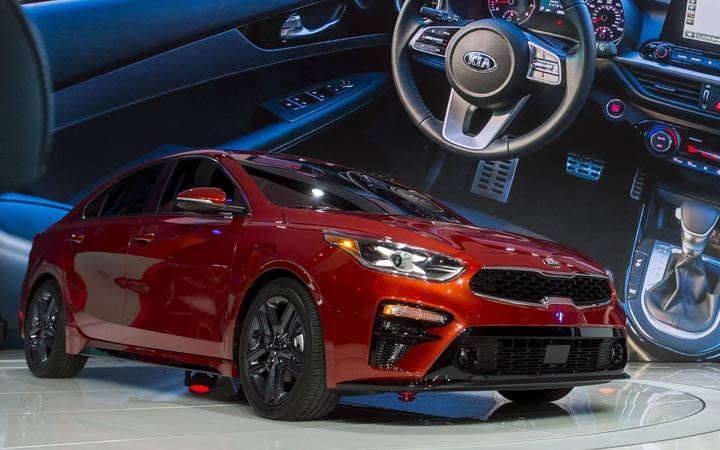 The one who chooses the basic version of the machine will receive, heated the front armchairs, mirrors, their adjustments, heated windshield, air conditioning system, excellent audio system, anti-lock system, several airbags, curtains. The price of the complication depends on the selected motor. The first will have to give 950 thousand rubles on mechanics and 990 on the machine. The second is already estimated at 1.05 million rubles.

In the top equipment of the equipment there are sensors and parking sensors, light, rain sensors, course stability, climate control, cruise control, emergency braking system, starting, xenon headlights, drive on mirrors, trunk, blind zone control and much more. This version goes only with a two-liter installation and is estimated at 1.2 million rubles.

Start of sales in Russia should be expected in the first months of 2018. Many residents of European countries have the opportunity to acquire this novelty.