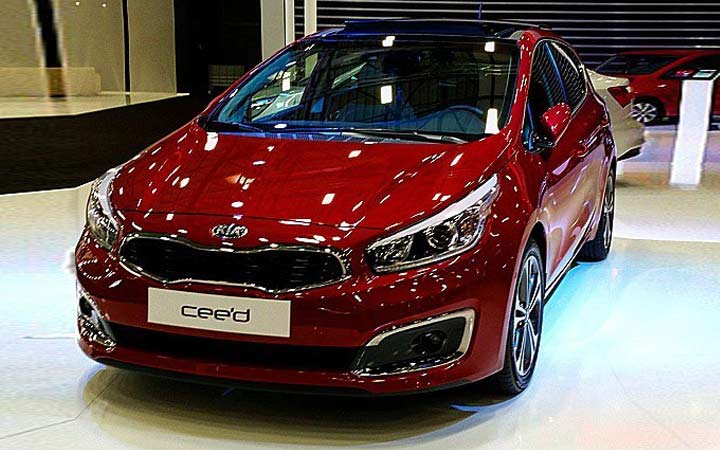 Cee'd compact car model, which refers to Class C, KIA manufactures since 2006. This car is designed specifically for the European market and is produced only in Europe. Initially, he had the only body of the hatchback in five-door execution, at the end of 2007 the version was released in the body of the station wagon, and from mid-2008, a version and three-door hatchback was produced. The second generation is made from 2012 to the present in the body of the hatchback in 3 and 5-door execution.

Among the advantages, this car should be allocated:

According to automotive analysts, the company has planned for 2018 the release of the new third generation of KIA CEE'D small agent. The official premiere is scheduled for autumn 2017 at the Frankfurt Motor Show.

After the spyware spyware on the World Wide Weaving, the Kia Cee'd of the Model Series of 2018 in the new body has decided to provide some of the information about the new model.

In general, the appearance of the new generation received a small number of changes. First of all, it is noticeable to update the design of the front and rear optics, which received LED execution. The front bumper has become more massive, and the grill of the radiator, although retained KIA branded traits, but increased greatly in its sizes. The front fog lights mounted in the front bumper obtained a rounded shape and an interesting chrome edge.

When the car is reviewed, it can be seen that it has not undergone significant transformations. The only transformation is associated with the advent of the new design of alloy alloy wheels.

It should be noted that the changes made in appearance are not revolutionary nature, the most vivid updates are made in the interior of the car and its technical equipment.

Inside the third generation got a completely new finish. All seats, dashboard, door upholstery and salon ceiling are made of high-quality new materials. Some elements received a not scratched glossy surface. On the survey photo of the interior, it is clear that the front panel and the inner handles of the doors got a bright chrome edging. The use of new finishing materials together with a set of structural solutions made it possible to reduce the noise in the car. The poor quality insulation of the previous generations of the car was an obvious disadvantage.

The manufacturing company, completely appropriate to modern the development trends of the automotive industry and in the face of tough competition, expanded the amount of electronic equipment that are planned to be used in the new car generation. Already in the basic version it is possible to install:

In addition, KIA has included in a minimal configuration to the buyer in the base version when buying a car, the following options and properties: rear view camera, speed limiter, tracking tracks.

The main changes in the next novelty in the Kia family relate to its boost space. Now the family of power components for the hatchback is represented by 6 diverse motors.

1. Installing MPI by 1.4 liters volume and capacity of 100 horsepower. Previously, the same motor was used on previous modifications of SIDE.

2. GDI gasoline motor by 1.6 liters volume, the performance of which is 128 horsepower. He is also familiar to the owners of the hatchback.

3. The new turbocharge Ecoturbo by 3 cylinder and 1.0 liters volume, the torque of which is 172 nm, and the power reaches the limit value of 120 horsepower.

The most powerful engine presented by the engine will be aggregated in a pair with a robotic DCT gearbox on 7 steps operating with two clutches. Other motors are easily complemented by both mechanical and automatic transmissions for 6 gears.

It is important to note that the Korean enterprise engineers have slightly upgraded the driving part of the car: ball supports, suspension, supports of stabilizers racks that have become hollow inside. Thanks to the refinement produced, the vibration isolation of Side has become much better. It should also be mentioned on the refinement of the front axle and steering, as well as the installation of the performance distribution system on wheels.

Dimensions and Cost of New 2018

The next version of the announced vehicle will keep the preceding generation parameters:

The basic equipment of the car weighs 1150 kg, with the standard steel wheels R15, and the size of the tires is 195/65. The number of doors can be 3 or 5, while the number of places in the cabin does not change and equal to five. The body of the vehicle is offered in the form of a wagon or hatchback.

Manufacture of autonovinki for Russian and European buyers to get out of the Slovak Plant in Silina in the summer of this year. A larger assembly of Kia LED is planned at the Avtotor plant in Kaliningrad. In the salons of official dealers, the car will be on sale closer towards the end of this year. Buyers will be able to choose between 5 a variety of vehicle complexes: suite, prestige, comfort, classic and premium. The color palette consists of 12 different types of color.

The basic version of the vehicle will cost about 730 thousand rubles, while the top assembly will exceed the price of 1 million rubles. Russians will be able to acquire the next variation of the SID model at the beginning of next year.