Also a little changed technical base. American motorists will be able to purchase a restyled SUV-class SUV for an autumn of this year. In the United States, the novelty got the name Outlander Sport. Basic configuration will cost approximately 20 thousand dollars.

By the end of the current or early next year, the new ASX model will appear in European and Russian car dealers. This is a great news for domestic motorists, since the current actual model of the crossover is not officially sold on the territory of Russia.

The restyled version of ASX from Mitsubishi should dial such models in the automotive market as Suzuki Vitara crossover and Honda HR-V Parcatenter. Now the car is actively tested in America and is preparing to start retail sales.

As you know, a third of Mitsubishi shares belongs to another Japanese car giant Nissan, who in the coming years plans to completely revise and update the range of its new acquisition. Therefore, Mitsubishi ASX 2018-2019 can be the last generation of the series in its familiar look.

The next generation of the car is planned to be released by 2020. The car will become the Nissan Qashqai Corrosive Council Commander and will have an appropriate appearance. Therefore, about the original car with a diamond shamener on the radiator grille, apparently, will have to be forgotten.

In addition to ASX, the Franco-Japanese "trolley" and the filling of the Renault-Nissan alliance will receive some more popular Mitsubishi cars.

The appearance of the new items shown in New York has not changed in comparison with the previous model. According to rumors, this is due to the excessive economy of the new owner and the future cardinal modernization of the series as a whole. The developers have updated the fine-sized radiator grille and supplemented it with a spectacular transverse plate with chrome plated.

A slightly modified the front bumper with strokes of daylight running lights and a neat head optics. Fog lights remained the same. LED overall lights have become more stylish, and an original chrome pad with a brand logo appeared on the door of the trunk.

It should also be noted a new rear bumper with imitation of diffuser, C-shaped fog lamps and reinforced plastic protection of the bottom. All changes are made taking into account the modern automotive fashion and the design policy of the company. For painting body, another interesting shade called "Alloy Silver" became available.

Like a dorestayling model, the new generation is characterized by a slight fit, comfortable and practical interior, as well as a neat interior decoration with high-quality materials. From innovations, you can allocate another layout of the central transmission tunnel.

Function keys and cup holders are now located more competently and conveniently. The gearbox selector shifted closer to the driver's seat for the most comfortable use.

According to the manufacturer, the salon is now better protected from external noise and has increased vibration protection.

Depending on the configuration, the following equipment will be available to the owners of the new SUV:

In addition, the manufacturer promises a rich set of modern security systems, all sorts of assistants and assistants to the driver 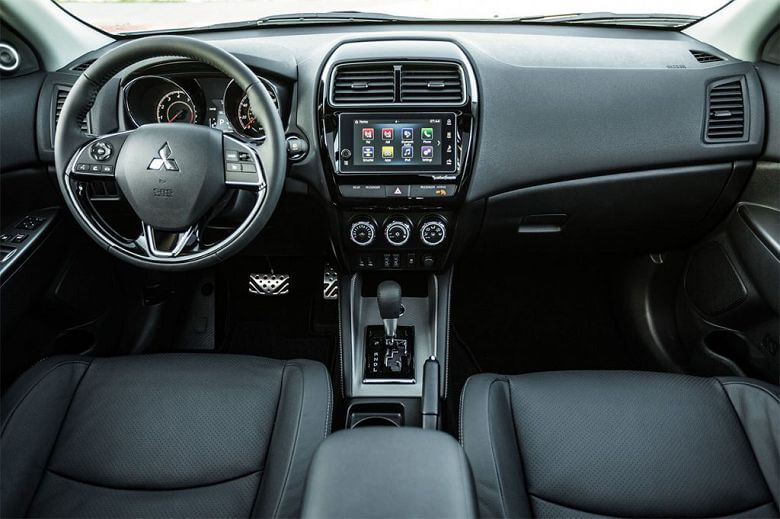 Restyled Mitsubishi ASX 2018-2019 will receive three engine options to choose from. The basic, the easiest option will be equipped with a motor of 117 horses, its working volume is 1.6 liters.

The average equipment will receive a 150 strong motor, which works in a pair with five band mechanics. For a fee, you can replace the mechanics with a variator.

An advanced version will be equipped with a 170 horses engine. It works in a pair exclusively with a robotic transmission.

The buyer will be available crossover with front and full drive. Switching to a four-wheel drive will be automatically.

Also, the manufacturer has plans to create a hybrid version of the ASX SUV, but there are not enough reliable details on the Internet.