The pre-showing of the new compact crossover Opel Grandland X 2018 from the famous German automaker took place in April of this year. The world presentation of the novelties is scheduled for September 2017. It will be held within the framework of the International Automotive Show in Frankfurt. Although European sales should begin for a couple of months earlier, in the summer of this year.

The basic cost of the novelty will fluctuate in the region of 23-24 thousand euros. According to the data available for official deliveries to Russia, it is not provided.

After Opel became part of the Association of automotive companies Peugeot Citroën Automobiles Groupe, the productivity of the German brand has increased markedly. Only in 2017 the company promises to release seven new cars.

The Grandland X car presented in this review is the second on the account of the stated brand after Opel Crossland X. Grandland is larger and roomy of crossland, and is positioned as his older brother.

Appearance and configuration of the crossover

The exterior of the new Parketnik is not particularly highlighted against the background of the Mokka X and Crossland X crossover models already shown models. The same branded design idea is traced, as well as other Opel new products.

The design is stylish and modern, but it is deprived of a certain "raisin", for which a look could be seized.

It should be noted the high-tech head optics of the adaptive type on the LED elements, a chrome-plated radiator grid with a massive logo, large wheels, overall lights of the original form with LED filling and 3D graphics, as well as an elegantly deployed roof with the effect of a guide created using painted in the dark The color of the front racks and partially darkened rear.

A small neat spoiler is located above the lid of the luggage compartment. A plastic off-road body kit extended around the perimeter. Doors are decorated with dynamic emptying, and the rear bumper is equipped with a silver-colored pad that imitating the narrow nozzles of the exhaust system.

Sizes of the new crossover:

The interior of the novelty is almost identical to the Parketnik Salon Crossland X. Especially this is noticeable when inspection of the front panel and the center console with a convenient touch display of the IntelliLink multimedia complex and two air ducts.

The main distinguishing feature is a more compatible trunk, the volume of which in the base version is 514 liters, and with a folded rear backs - 1652 liters.

The front armchairs have ergonomic properties. This is evidenced by the certificate of the Medical Association, which is engaged in the health issues of the spine. Separate rear seat can be moved along the cabin. There are also comfortable armrests and places for glasses.

The owners of the new auto model will be provided by the following systems:

The New Grandland X Office will become even easier and more convenient, because the model will be equipped with such options as:

The automaker plans to provide potential buyers a wide selection of power units, submitting to the market diesel, gasoline and, quite possibly, hybrid versions of Opel Grandland X. 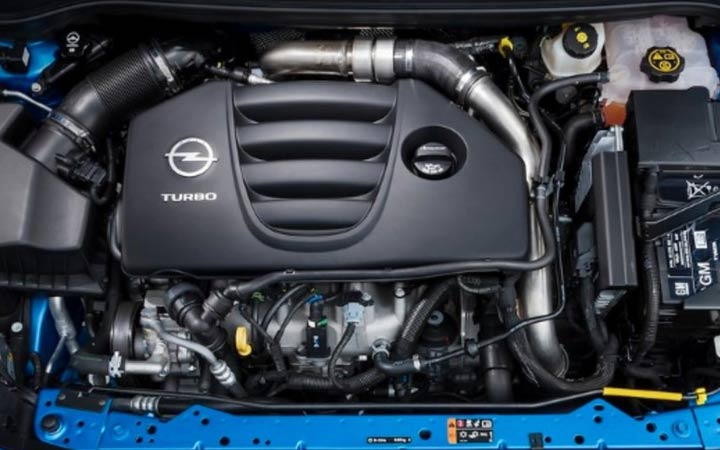 The price of Opel Grandland x on the Russian market at the time of the exit, apparently, will vary in the area of ​​1-1.5 million rubles. It is if you repel from the current value of the PEUGEOT 3008 value, its analogue. In the free sale, the car will come in approximately early in early 2018, or even at the end of 2017.

Look at the short video about the car Opel Grandland x 2018: