The Outback Automobile, which is an off-road all-wheel drive version of the Japanese LEGACY wagon, Subaru introduced as an independent model in 1996. Outback is a five-seater crossover with increased cross-country.

The main key advantages of the SUV should be considered: 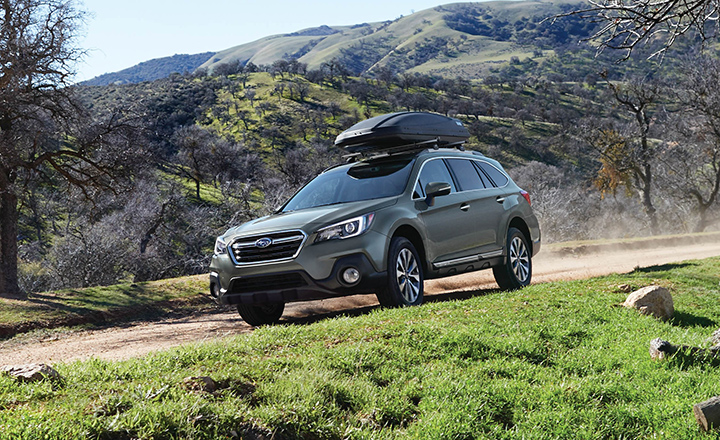 The previous modification of the SUV was represented by 2014, and the next year went on sale therefore, in accordance with the plans of Subaru, Outback was restyling after the LEGACY model. Traditionally, SUVs of the Japanese company are more high demand in North America, therefore, the changes in the new modification of Subaru Outback 2018 are made by accounting the specifics of this market.

In accordance with the photos represented, the new Subaru Outback 2018 model year, in appearance acquired minor changes, but they added a crossover of solidity and expressiveness, while retaining in design former confidence, power, prestige. 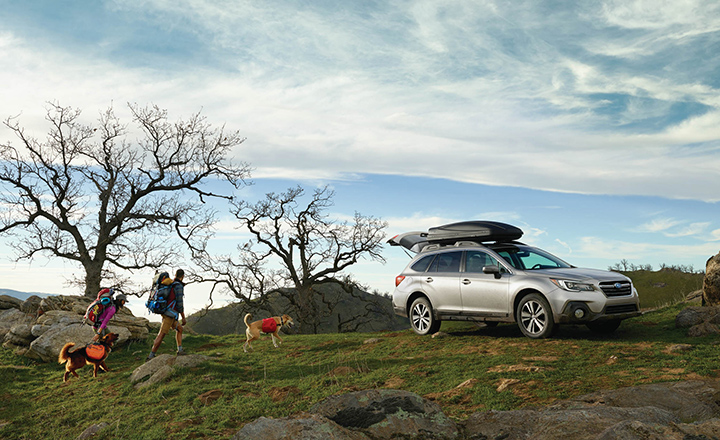 First of all, the novelty is distinguished by new upgraded front headlights in which the C-shaped sections of LED running lights are mounted. True, the entire LED head optics with an adaptive lighting system will be available only as an option. Also, modified front and rear bumpers, the realies of the new design on the roof, the updated design of the side mirrors, allowed to improve the aerodynamic characteristics of the car, reduce the noise in the cabin.

Side of the car is still highlighted by soft and smooth lines of transitions of the body design of the body, but is distinguished by the new design of 18-inch wheels. On the bottom of the bottom, the black plastic body kit is preserved, indicating the off-road status of the car. 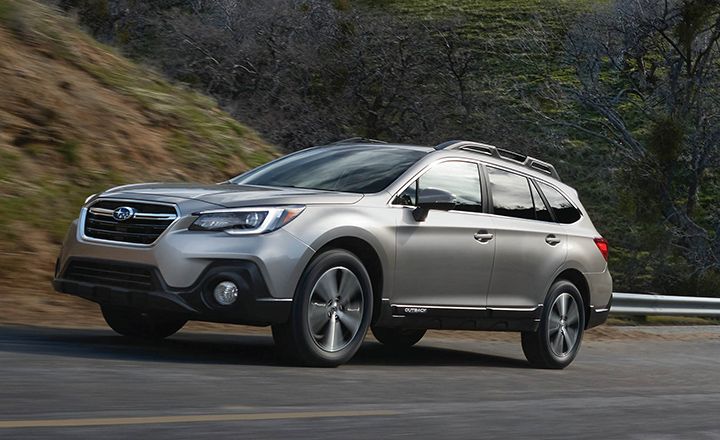 Outback looks very nice behind. First of all, at the expense of a narrower rear window on a large luggage door, while at the application of the manufacturer visibility did not suffer, since the line of the glass itself became slightly lower, and the rear racks became less wide. Completes an interesting image of the rear spoiler with a built-in stop signal.

External dimensions remained unchanged, and have the following indicators: 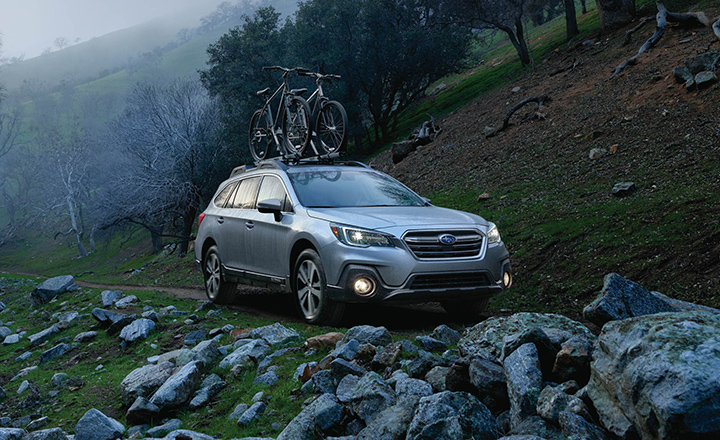 Inside the manufacturer also made minimal changes, making emphasis on the use of technical innovations in the design of the car. Among the cabin updates should be allocated: 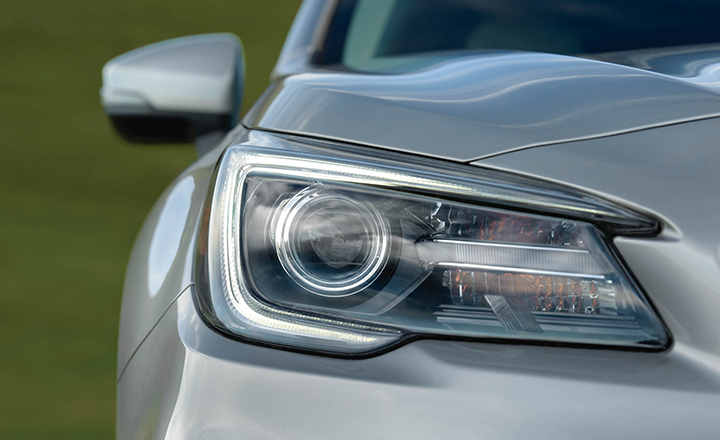 The thoughtful design of the internal controls of the car guarantees high-quality work and ease of use. Two deep "well" stand out on the front panel, in which the devices are placed: tachometer and speedometer. Between them are located the LCD screen from the side computer. All information about the technical parameters required for control is displayed. A 7-inch navigation and entertainment system with simple and convenient navigation, as well as with anti-cancer properties, is mounted on the center console. The voice control function will be available as an option.

The door of the luggage compartment is equipped with an electric drive, which is very convenient for the implementation of loading-unloading, and the trunk itself has a volume of about 500 liters in a standard version and 1080 liters with the rear seats folded (60/40). 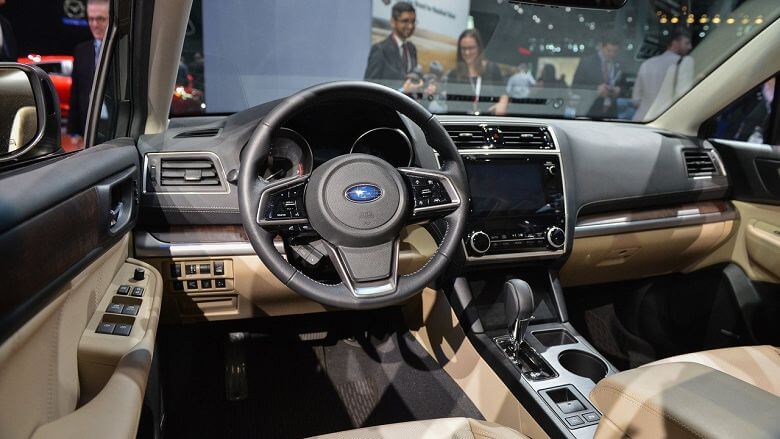 Details about the characteristics of Outback 2018

After updating, the engines began to pull the body better. The fact that power has not changed significantly. And in the cabin it became quieter. Most of the packages are installed an engine for 2.5 liters. 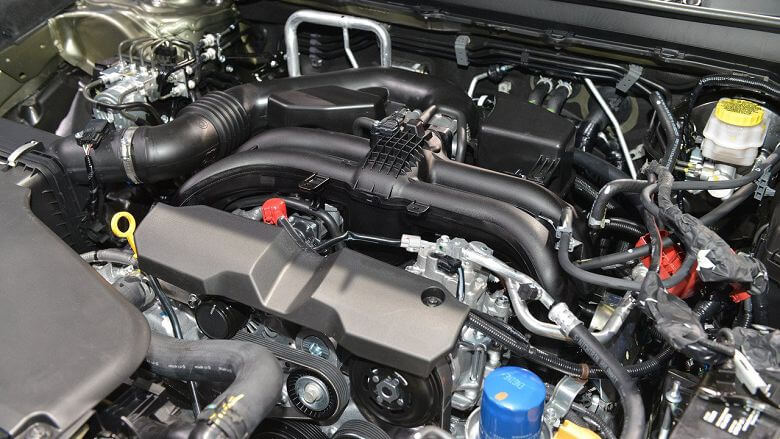 Plane type motor and installed below than usual. It helps to make the center of gravity. The force is transmitted to all four wheels through a stepless CVT type box.

Four cylinders provide Outback quite sufficient power. Such an engine has become possible to continue to install after the latest improvements. In urban realities, this engine is quite cheerful. Considerable influence has provided a CVT technology. It is capable of maintaining the engine in the required power range.

With a sharp acceleration in the box, six steps are clearly traced. A 3,6-liter engine is installed on the Limited and Touring package. Him:

It provides sufficient thrust at any speed. Steering is clear. The trip is soft enough. The systemization system is applied on hard turns. Braking is performed individually for each wheel.

To make a trip to the primer even more comfortable, the degree of suspension stiffness was changed. If you ride on the eighteen-seamy wheels, which are installed in Limited and Touring, the trip will be a little tougher than seventeen-seven.

In the cabin, there was less noise from the wind. Outdoor rear-view mirrors have also changed. Additional laminated glass are installed. Each Outback is able to tow the trailer weighing 1225 kilograms.

Thanks to the X-MODE system, the desired road clearance is supported in the model. The button with this name helps to increase the clearance. The former traction parameters disappear and the hill control mode is turned on.

But it's not worth entering serious obstacles. Because the movement may make too long the front and rear bumper. And regular tires are not designed for off-road.

This subaru is very similar to a wagon with a very high lumen. It updated the interior that will attract buyers. 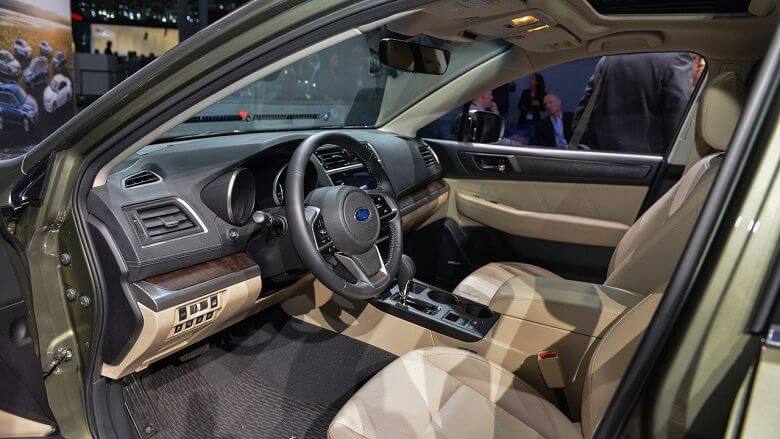 Front seats are equipped with excellent side support. The second series is very spacious. A good horizon opens out of it. Starting with Premium configuration, the front seat of the driver is equipped with an electric drive.

There is an electric drive for the passenger. It appears, starting with Limited. On the rear seats, passengers get a huge amount of place. Another USB port appeared in this zone.

It is located on the back of the front console. If you open a large back door, you can see the space in 1005 liters in the trunk. With a folded range of seats there will be as many as 2067 liters.

Such improved sound insulation and laminated side windows are added. It's nice to feel the soft materials in the salon. Changed steering wheel. Before Premium Salon will be covered with cloth. It seemed durable and fits well into the interior. In Limited and Touring Skin Covered. Touring equipment is significantly more expensive.

I want to have better skin for this price. But the general type of design is quite acceptable. Because prices vary from 25 to 40 thousand dollars.

At Subaru, a set of functions and equipment is a long list. Many of them are high-tech. Therefore, the model has shown itself very well with crash tests. 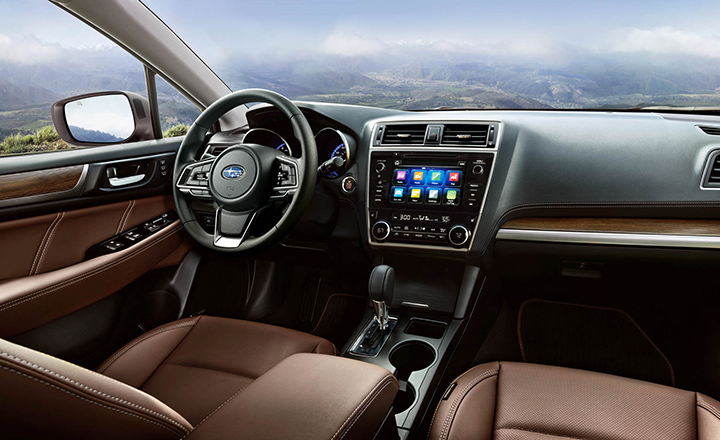 Starting with Premium, the Eye Sight system is installed. There are functions:

All sensors are securely protected from damage when traveling. They do not affect a large amount of dirt on the road or a negative temperature with a nagged snow.

Competitors cameras and sensors are integrated into the bumper. Therefore, there is more likelihood of their damage.

Features of the configuration of Subaru 2018

The manufacturer has well equipped each setting outback. For extra charge, you can get even more. A new entertainment system has appeared. It accommodates new features and a large screen.

The first is a base level. It is also called 2.5i. Because there is an engine with such marking. There are installed:

Colors are limited and there is no possibility to order options.

Three optional packages are available. The first gives a hatch. The second offers chambers for the security system. The third package includes all of the above-mentioned early and navigation. Limited package can be 2.5i and 3.6r. You can choose one of two engines:

Both of them are flat. Together with the six-cylinder give:

You can buy in the option in one camera package and navigation. Touring equipment is 2.5i and 3.6r. It includes what is on Limited and a special upholstery of brown leather is added. There is also heated for the steering wheel. 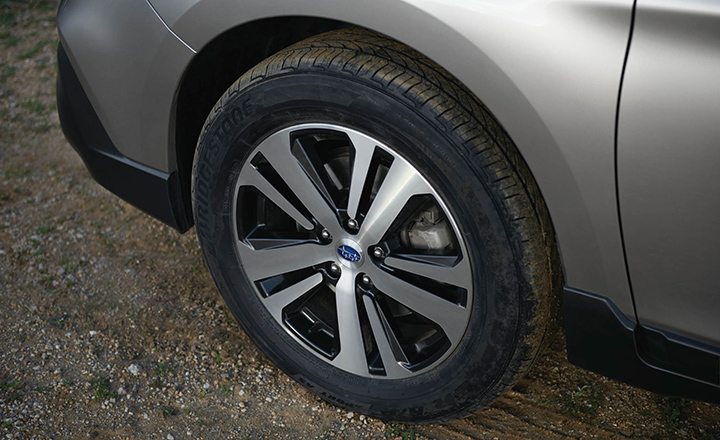 The most expensive version is 3.6R. Its cost reaches almost 40 thousand dollars. The configuration of CROSS COUNTRY and ALLOD competitors contain a similar number of systems and functions. Their cost is noticeably higher. 3,6R added:

The more powerful engine version of the budget buyer will seem too voracious. Therefore, for most buyers will receive a four-cylinder.

Tests showed that fuel it consumes amazingly modestly. In the city, it will take 9.4 liters, on the 7.4 highway, in the combined trip 8.4. Any competitor will lose a new outback on consumption.

He has a lot of space for passengers and a huge trunk. These are important factors for the buyer. If you choose a complete outback 3,6r, then the consumption will be 11.8, 8.7 and 10.7 liters. It pleases the fact that the engine takes unleaded fuel. And his competitors are only a premium class. Therefore, even with a large engine will be a small savings.

The cost of each configuration in dollars: