Ford Focus's first cars appeared in Russia in 1999 and, since they were sold more than half a million in our country, which once again confirms - Ford cars are very popular throughout the CIS and in particular in Russia. It is possible to argue with absolute confidence that the new Ford Focus 2018 will enjoy a huge demand from Russians. No wonder - the car is available for middle class, service prices and spare parts are quite democratic, quality at the proper level. Let's take a look at Ford Focus closer and see what he represents himself? 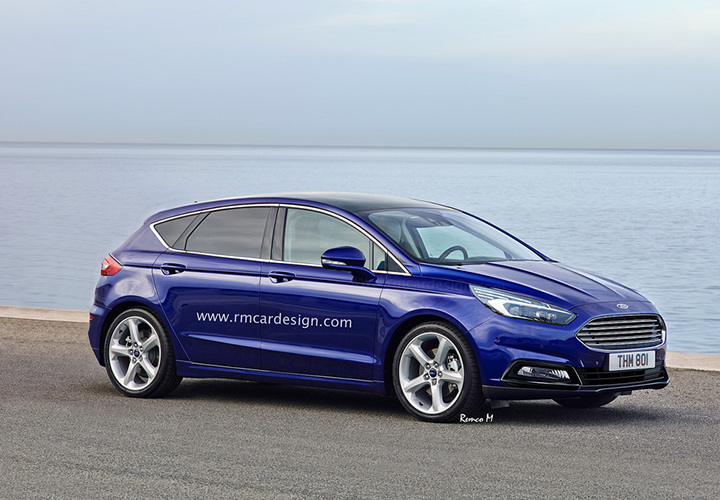 Generation 1 (1998-2004). Initially, cars were produced in Germany with Spain, a little later, production was established in the USA and Mexico. And in 2002, the conveyor was launched in the Leningrad Region, which predicted the future popularity of focus in Russia and made them a "folk" car.

In the same year, a substantial restyling was conducted and "pixed" versions of ST170 appeared (Rally Sport).

Generation 2 (2004-20011). The car became more versatile and was produced on the platform C1, on which, also go a series of stamps Volvo and Mazda. In 2008, restyling in the style of the so-called, kinetic design was presented at the Frankfurt Motor Show.

Generation 3 (2011-2018). The model was presented at the Detroit Auto Show in January 2010. Cabripes and 3-door coupe were removed from the ruler. The technical characteristics of the platform and the engine were significantly improved, and, as well, security systems. In 2014, restyling was held, and, also, the release of models with a diesel engine began.

Generation 4 (2018 ...). Despite the fact that the 3rd generation of focus was extremely successful, his time passes and, if you believe the promises of the manufacturer, in 2018 we will see Ford Focus IV. It is known that the manufacturer has already been testing the novelty, most likely the body shape itself will be changed insignificantly, but many modern "chips" appear, such as LED optics already in the basic configuration, as well as more modern and stylish materials will be used in the interior.

At the moment, spyware managed to capture only the prototypes, on which only certain technical developments were experiencing, planned to introduce in the new Ford Focus 4 2018. The appearance of the car will be slightly more aggressive, as far as this word is generally applicable to this model, it would be more correct to say that it has become expressive. It is important to note that according to the statements of the Ford leadership, a novelty will surpass the current version of Ford in size, so that it will become more compatible and practical, especially wagon. The paradox is that, together with an increase in overall dimensions, the car will be easier for almost 200 kilograms, thanks to more modern body materials. Considering that his mass and so was small - 1300 kg., Change is very significant.

Increase the car planning both in length and width, which will be possible through the use of a new chassis. It is possible that the new car will acquire innovative LED optics, as it has already made his main competitor in the C-class - Opel Astra K. Using such optics, as the experience of the same Astra has already shown, the right way to success, especially if the company is aimed at Expansion of presence both in Europe and in Russia. 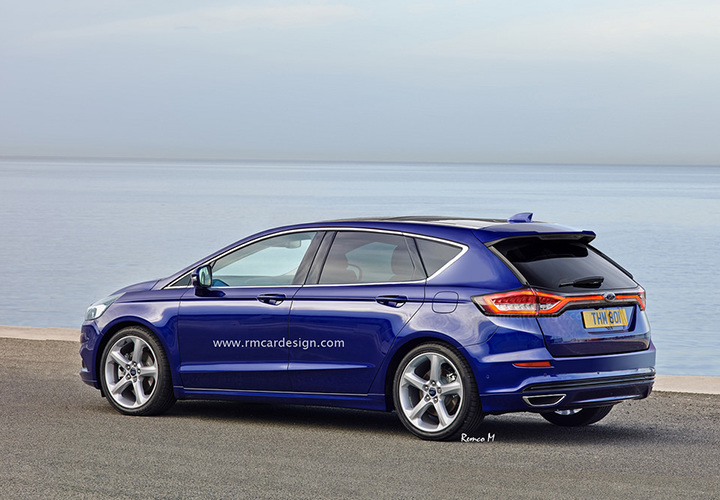 If we proceed from the words spoken by the company managers, then in the novelty should be expected to use new quality materials in the car decoration. Ford also promised to revise the multimedia system, in particular, recycle design and improve performance. In addition, the new multimedia will support Android Auto and Apple Car - but it is rather no advantage, but a necessity, tribute reality. Perhaps, in favor of trends, the new Ford will acquire a completely digital instrument shield. As already mentioned, due to increased body size, inside Focus 4 will become somewhat spacious. Probably, following its main competitor in the C-class, a novelty already in the base will be equipped with heated by the rear row of seats.

The car's wheel will be slightly less in size and acquire a more sporty look. 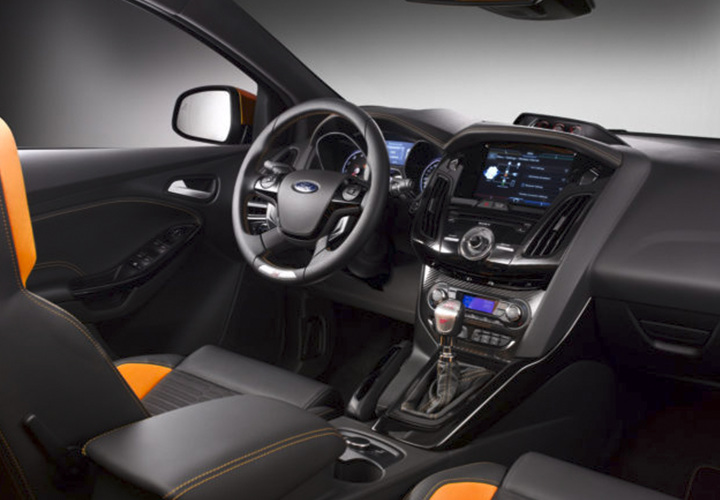 Specifications of the Ford Focus 4 generation 2018

The whole line of Ford Focus 4 2018 is equipped only with turbocharged ECOBOOST and ECOBLUE engines.

Gasoline EcoBoost will be presented in two variations:

Ecoblue diesel line will be present: 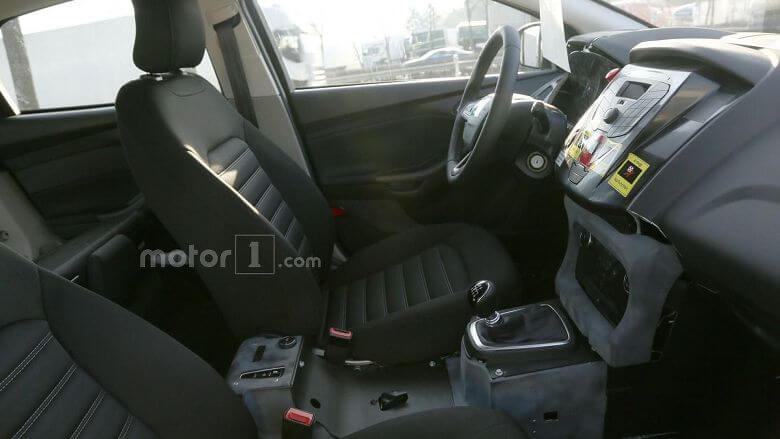 The manufacturer hints that the 2018 Focus car can also be equipped with a hybrid engine with a stroke of more than 150 kilometers on one battery charge and completely electric drive, but the availability of these models on the Russian market still remains under a big question.

Do not forget about the "hot" versions of RS and ST, which in addition to the forced two-liter motor with a power of about 260 horsepower, will be supplied and the full drive system.

Since we touched on the topic of the drive, let's look at the transmission and suspension. There is no unambiguous information from the manufacturer, which is strange. It is only known only about the presence of a 6-speed manual gearbox and the 6-speed "robot".

It is also worth considering the appearance of the POWER SHIFT machine, which has perfectly proven itself on the third generation of focus. But that's what really remains a mystery, and at the same time causes some interest, this is a completely new automatic transmission with 9 steps.

As for the suspension, it can definitely be said that the enlarged wheelbase will noticeably affect the undercarriage characteristics of the Ford Focus car 4 2018. But to say, this suspension will be more smooth and a comfortable or the machine, like a cat, cling to the roadbed, we can not yet, it all depends on the settings of the suspension and steering.

It is still worth considering that, despite the increase in the size of the body of Ford, its mass is noticeably lower than that of the predecessor and will be something about one ton. This is achievable due to the use of high-strength steel, aluminum, as well as carbon fiber, which will facilitate the car.

Regarding the drive, naturally, preference will be given to the front leading wheels, of course, in addition to the "charged" versions, which will be equipped with a complete drive. 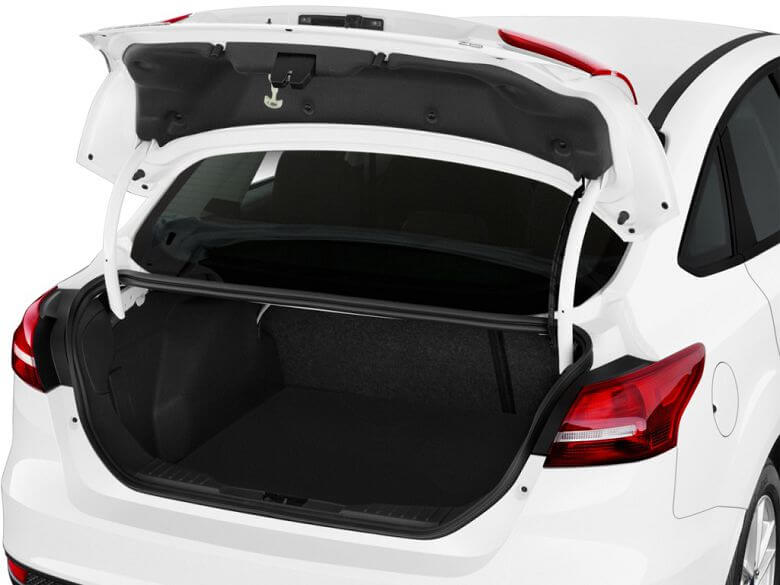 We analyze what we learned about the new Ford Focus model 4 2018 and compare with previous versions of the car, with their minuses and pluses.

Of course, the new model will become extremely attractive car. The machine combines interesting, according to the current standards, design, modern technical stuffing with a large number of different functions.

Of course, the wealth and quality of the finish materials will not remain unnoticed. But if you think, then these changes and improvements directly affect the price of the car and, as a rule, lead to the increase in the product of the product by 15% of the previous version.

And we remember that one of the advantages of previous versions of Focus was its availability. Thus, the increase in the price of the car will lead to the fact that in the domestic automotive market, the sales of Ford instantly and will significantly decrease.

It will not be further remembered that lately there has been a tendency from the car owners to massively transplanted on the "Fiesta", which last year ranked second in terms of sales. Therefore, the rise in price of Focus will only aggravate the situation.