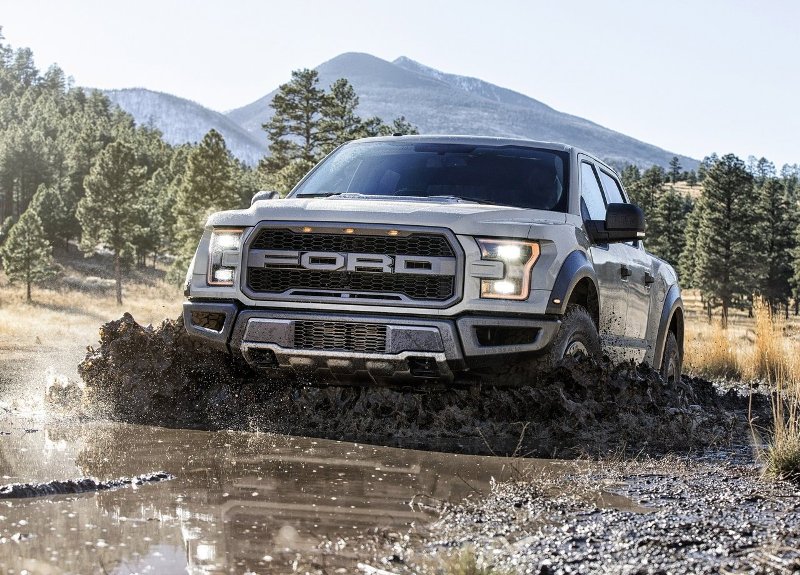 The largest American automotive manufacturer Ford is preparing for the release of the second generation market of its popular sports pick-up F-150 Raptor 2018 model year. First, sales will begin in North America. There it will be possible to purchase a novelty in September of this year.

Two constructive versions of the car will be available to American fans of this brand: with one-time (SuperCab) and double (Supercrew) cab. Representatives of the company have already made a statement that the official supplies of Ford F-150 Raptor 2018 will not be on our market. However, according to specialists, it will not stop the owners of the "gray" car dealers and they will find the opportunity to deliver an updated pickup and our car enthusiasts. 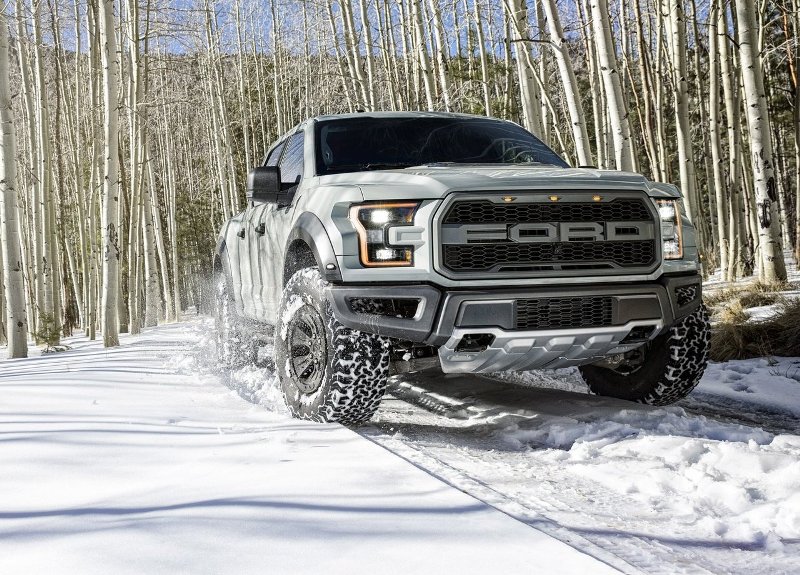 The basis for the second generation of the pickup was the platform from the previous classical model F-150 thirteenth version. But grave changes and amendments were made to her design, which allowed to create a truly powerful and luxurious car.

This huge pickup with ease overcomes any off-road. In addition, it has an impressive speed and excellent maneuverability. Externally, the car looks stylish, expensive and aggressive. 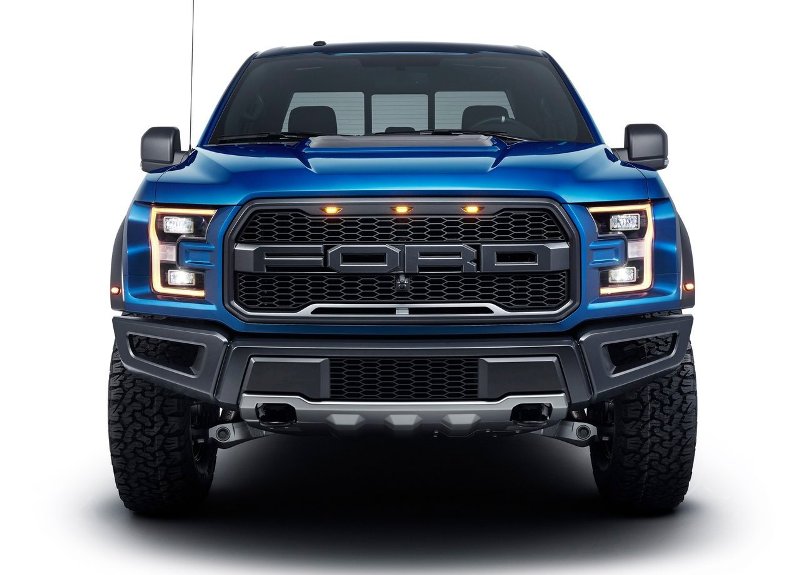 The new Ford F-150 model is radically different from its classic fellow. The "nose" of the car decorates the massive radiator grille with a huge sign in the form of the company name. Also in front of the three lighting elements on yellow LEDs. A neat bumper looks stylish and unusual. It is located at a fairly large distance from the Earth, which is very important for the SUV. 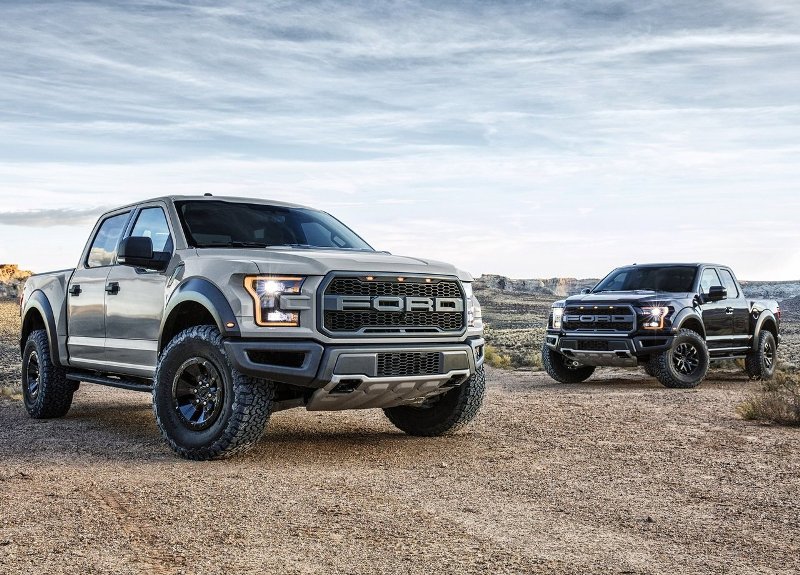 For better sustainability on the road, designers significantly expanded the front and rear axles. The rubber size also increased six inches. The manufacturer promises that even the basic configuration of the model will be installed luxury alloy wheels and specially designed tires.

Wheel arches are reliably protected from external damage with high-strength plastic overlays. Behind the machine is equipped with a massive bumper with a company logo and model name, as well as two exhaust pipes of solid size. 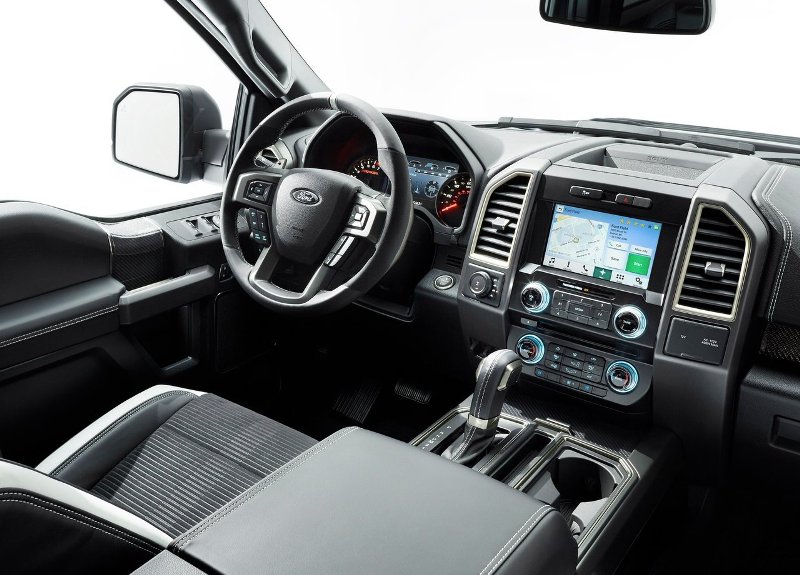 As for the cabin, the designers were worked out here. Stylish and high-quality interior is one of the raisins of the novelty. In the decoration used genuine leather, expensive fabric, modern plastic, elements of carbon and aluminum.

Since the model is positioned as a sports car, then the chairs here are made accordingly. On the sides they have support and are adjustable by electrical drive. There are also heating and ventilation features.

In addition, the following systems and design elements can be found inside the cabin:

While buying you can independently pick up the color palette of the cabin. The choice is large enough. In addition to the basic configuration for a fee, an extended package of functions is offered, including various modern help and security systems. 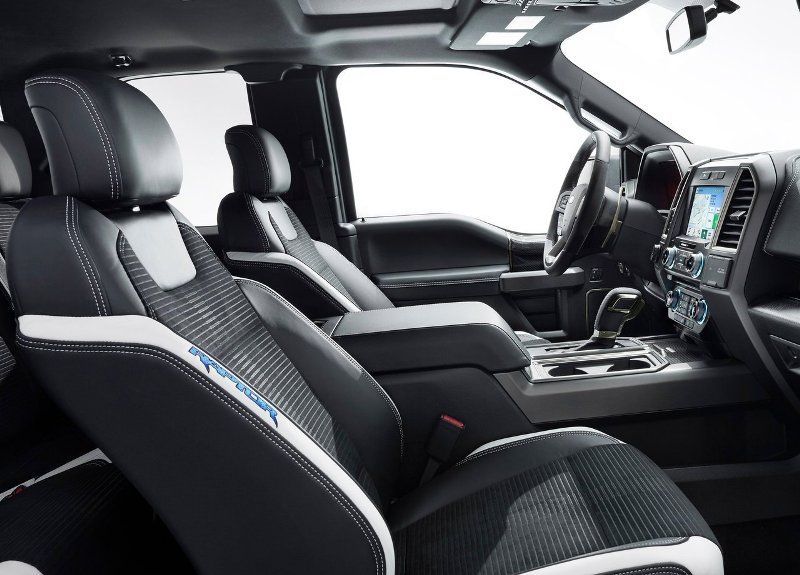 Specifications of the new generation Ford F-150 Raptor 2017-2018: Unlike simple versions of the Picap F-150, the Raptor modification is standardly equipped with an energy-intensive Fox Racing SHOX suspension with original 3-inch diameter shock absorbers (5.5 cm), providing high performance with huge free suspension (front 284 mm, from behind 304 mm), full-wheel drive with a new handout (in stock Mechanical lock and flexible distribution of thrust between the front and rear wheels), the Terrain Management System system, which allows you to change the engine operation algorithms, gearbox, suspension and electronic systems (ABS, Traction Control and Electronic Stability Control) with six modes (Normal Mode - for everyday ride, Street Mode - for fast traveling on asphalt, Weather Mode - rain, snow or frightened, Mud and Sand Mode - dirt or sand , Baja Mode - For quick movement on sandy locacy, Rock Mode - crawling mode to overcome areas from stone mi or boulders). If such an off-road arsenal does not seem enough, the manufacturer suggests as an option of high friction differential for the front axis of the Torsen type. 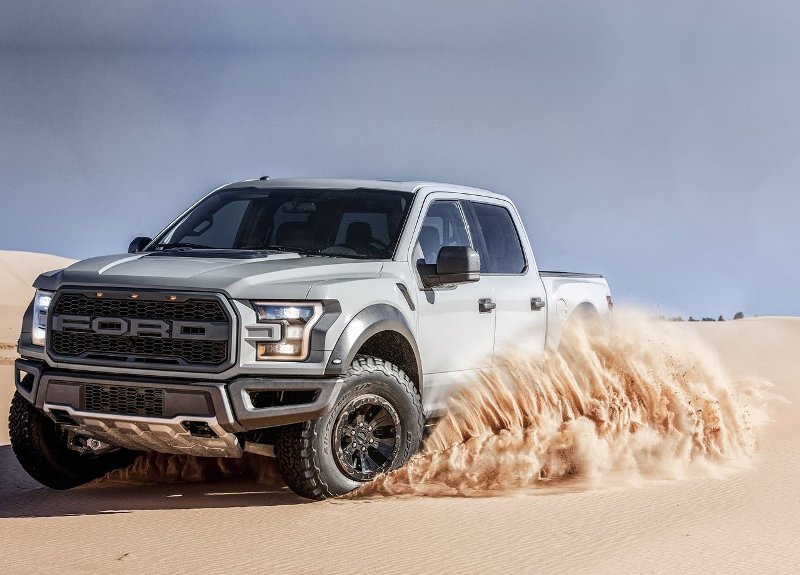 Honestly, the new Ford F-150 Raptor is a phenomenal car, and its competitors Dodge Ram 1500 Rebel, Toyota Tundra TRD Pro Pro Pro and Nissan Titan Warrior chances are simply not in the fight with the best Pickup for serious off-road.